Scott Blasco: One Day as a Thousand Years 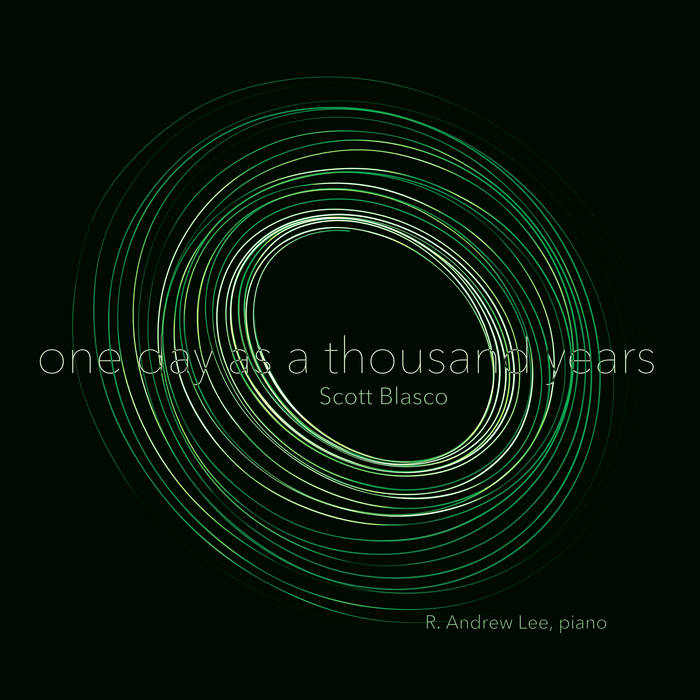 The Christian liturgical calendar is cast in two arches, centered on the pivotal mysteries of the Incarnation and the Resurrection. They are united in a shared structure: a period of waiting, followed by a crisis point of Divine action, and finally an expansion that transforms and suffuses the world.

With the Incarnation, there is a time of waiting and preparation known as Advent. The “local” Divine event of the Nativity is celebrated as Christmas, but only takes on universal significance with Epiphany, which proclaims his birth as salvation for all the world. Likewise, the Resurrection is preceded by the season of Lent, a time where penitents are encouraged to fast, pray, and give alms. That narrative of Christ's Passion plays out during Holy Week, culminating in the celebration of Easter. Here again, this mystery finds a universalizing expansion in Pentecost, the descent of the Spirit on a small band of followers who then carry it out into the world. The symmetry and union of these two spans is further deepened by their focus on birth: the birth of God as a human being in the Nativity, and the resurrected Christ as “first born of the dead.”

With that theological symmetry in mind, my intent in shaping One Day was to create a cyclically-structured work reflective of the cyclical nature of the church year, allowing it to begin with either of the two large spans (Part I: Advent-Nativity-Epiphany and Part II: Lent-Resurrection-Pentecost in the score), or for either to be performed alone. Introducing, punctuating, and transitioning between them are two different Ordinary Time movements, the pair cast in the same rhythmic and gestural shape and rooted in a shared (but inverted) harmony.

In the context of the liturgical year, Ordinary Time is a sort of holding pattern, falling between the two central Christological celebrations. In a similar way, the two central celebrations of the Nativity and the Resurrection share both a harmonic and a textural parallelism in their slow pulsing chords: the first quiet and tender, reflecting the held-breath holiness of birth, the second strong and jarring, evoking the drama of death defeated. Less direct but still reflective of their structural parallelisms, the Advent and Lent movements are both characterized by dissonant background harmonies, and Epiphany and Pentecost share an inverted harmony and texturally similar piano writing.

Chant, chimes, cathedral bells, and recorded, distorted piano samples are incorporated alongside synthesized drones and live signal processing to make up the layers of electronic sound. The recorded chants used throughout are drawn from those historically associated with each respective liturgical season. Of note also is the appearance, just before “Resurrection,” of a hymn I’ve long loved, Herzliebster Jesu (the well-known English version is Ah, Holy Jesus). While there are many beautiful liturgical chant melodies that mean a great deal to me, this Lutheran Passiontide hymn has always stood out as an agonizing lament over the Crucifixion. Immediately preceding this hymn, five thunderous chords signifying the five wounds of Christ give birth to a swelling, distorted roar—the Strepitus of the traditional Good Friday “Tenebrae” service, symbolic of the convulsion of creation at the death of its Creator.

Part of the background to this work is my long fascination with concert-length piano works—works such as Stockhausen’s Mantra, Bach’s Goldberg Variations, or Messiaen’s Vingt Regards sur l’Enfant-Jesu. While this work clocks in a bit shy of that scale, it nonetheless accomplishes the goal of encompassing a complete and (hopefully) compelling musical statement. Aesthetically worlds apart, the tightly integrated musical materials combined with background simplicity and cosmological significance rhyme to my ear with Gustav Mahler’s dictum that “a symphony must be like the world; it must contain everything.” The Liturgy re-presents and participates in the simultaneously time-bound and eternal story of the universe, and of the One who was willing to enter into and be broken by creation so that, in doing so, creation could be made whole in union with its Creator.

Recorded on the Richard Cass Memorial Steinway in White Hall, at the University of Missouri-Kansas City.

This work was supported in part by a New Faculty Seed Grant from Washington State University.

For more information on the Graduale Project: gregoriana.sk