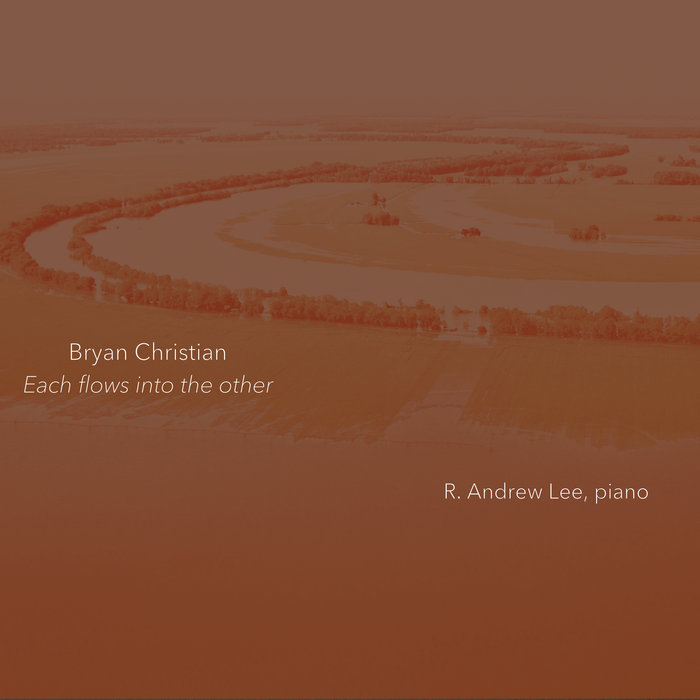 
Dual sound worlds flowing into and out of each other, converging and then diverging, and allowing expressivity to rise to the surface. Not quite a sound environment or installation, yet more immersive than a musical composition relying on conventional notions of teleology, such that the listener might be surprised when they realize where they’ve ended up. That’s the idea behind Bryan Christian’s "Each flows into the other" for piano and electronics, a two-hour exploration of intervallic and spectral musical relationships. The piece’s durational immensity stands in contrast to its moment-by-moment attention to miniscule musical details. The work enfolds the listener into two separate musical landscapes that ultimately melt together into a single sound world, like a sonic Venn diagram of two different yet overlapping soundscapes with the listener situated in the middle.

"Each flows into the other" was commissioned by the durational experimental superhero pianist R. Andrew Lee. Although he started out playing Rachmaninov and Beethoven, when Lee was introduced to the music of William Duckworth in 2006, “I first heard the pieces that would change my life.” Lee began programming Duckworth on his recitals and concerts while also exploring minimalist works by other lesser-known minimalist composers such as Dennis Johnson and Ann Southam. Lee is known not only for his strong pianistic ability but for his endurance in performing works that, at multiple hours long, can often be described as “glacial.” Lee has explained that he is drawn to minimalist music because “Rather than pushing and pulling listeners through a piece—manipulating us (no matter how deftly) into some experience—minimal music presents an invitation to explore a musical space slowly and carefully.” His collaboration with Christian, then, is a match made in heaven.

"Each flows into the other" explores Christian’s longstanding interest in the commonalities and disparities between diatonic and spectral sound worlds. Diatonicism is based on the traditional Western classical notion of “major” and “minor” scales, which are measured out in arrangements of ascending and descending intervals. (Think “do re mi.”) Spectral music, by contrast, is focused on different qualities within and between sounds, such as tone color (or timbre), microtones, and the overtones that sound in simultaneity with any given tone. So, the focus within spectral music is less on horizontal relationships between notes, but vertical layers of sounds happening all at once. Christian is unique in his investigation of the possibility for spectral processes to inform, and be informed by, diatonic processes.

Christian’s earlier works include "Direct your step further along the road’s course" commissioned by the E-MEX Ensemble, and "Of a rose synge we" commissioned by the Lorelei Ensemble. With his works, Christian generates sound worlds that are inviting and enveloping for listeners, who are given enough time to become entranced by the unhurried details in the patterns and processes. Upon first glance, Christian’s complicated compositional techniques might seem intimidating and inaccessible, but the way that he translates these ideas into sound always results in a sonic experience that is as inviting as a blanket right out of the dryer. For instance, his piece "Chain Shift" is named after and inspired by the linguistics term for linear motion along a phonological scale—basically, when the pronunciation (but not the spelling) of words changes very gradually over the course of centuries. (An example of this phenomenon would be the “Great Vowel Shift” during the transition from Middle English to Modern English.) "Chain Shift" is an abstracted and musical expression of this idea, while "Each flows into the other" illustrates a less monumental and more distinctly musical process.

Lee’s latest commission explores the duality of diatonicism and spectralism through a two-hour conversation between piano and electronics. The delicate piano playing occurs against a backdrop of sixteen electronically-produced drones that are modeled after the tone color of piano resonance. These drones, however, are never static. Christian has manipulated the electronics by placing the drones in an elongated harmonic series where the elongations themselves change over time: “the stretching of overtones is relaxed until it first reaches the traditionally referenced harmonic series and is then further compressed.” The result is essentially several two-hour-long electronic glissandos, each sliding at their own pace. The unfathomably slow descent of the electronics contrasts with acoustic improvisations that intersect and overlap with the drones such that “the diatonic collections played by the piano are actually part of the spectral process occurring in the electronics.”

"Each flows into the other" is less of a journey more of an environment, constructing a sound world around the listener rather than taking the listener from one place to another. This allows the listener to remain stationery, to notice more, to listen in new and different ways. After hearing this album, the listener will find their ears more attuned to sounds that are not conventionally “musical”: the hum of a refrigerator engine, car tires on slick pavement. But the piece itself is undeniably musical, as piano chords collide and coalesce with warm electronics, gliding along as slowly as melting ice. The piano and electronics interact in a sort of feedback loop in which, as the title suggests, it’s never quite clear where one begins and the other ends.


The work’s title is drawn from a line in Geoffrey of Vinsauf’s thirteenth-century treatise Poetria nova: “Each flows into the other; and from this double river, expression will overflow.” A medieval grammarian, Geoffrey of Vinsauf concerned himself with the careful arrangement of words and thoughts in the Poetria nova, which brings together rhetorical and poetic stylistic elements. One of Christian’s earlier works, "Of a rose synge we", similarly bridges the medieval with the modern; Christian encourages listeners to read the fifteenth-century macaronic text and translation “before, rather than alongside, the performance in hope that the labyrinthine setting will move through the listener more directly and more powerfully.” The words are presented out of order, fostering a similar manner of close attention to temporality and unfolding processes that musical minimalist works tend to foster.

The minimalism of "Each flows into the other" likewise encourages a close attention to careful arrangements, not of words but of sounds. This wordless minimalism exists not as a stable object but as a process evolving in time. Like many minimalist musical compositions, the experiential thrust of Christian’s two hours for piano electronics is an Oliveros-style close listening, and his layering in of spectralism allows an attention to vertical sonic details in addition to changes over time. Christian wanted to allow “the listener to aurally zoom in and explore the most minute changes and interrelationships between these unique sound worlds” even as the listener is situated within a vast landscape of convergences and divergences. The duality not only of sound worlds, but of temporalities as well, allows the listener to examine individual grains of sand while keeping an eye on the horizon.

Recorded November 1-2, 2018 on the Richard Cass Memorial Steinway, White Hall, at the University of Missouri-Kansas City, in the presence of the composer.

The production of this recording was supported by a grant from NewMusicUSA.