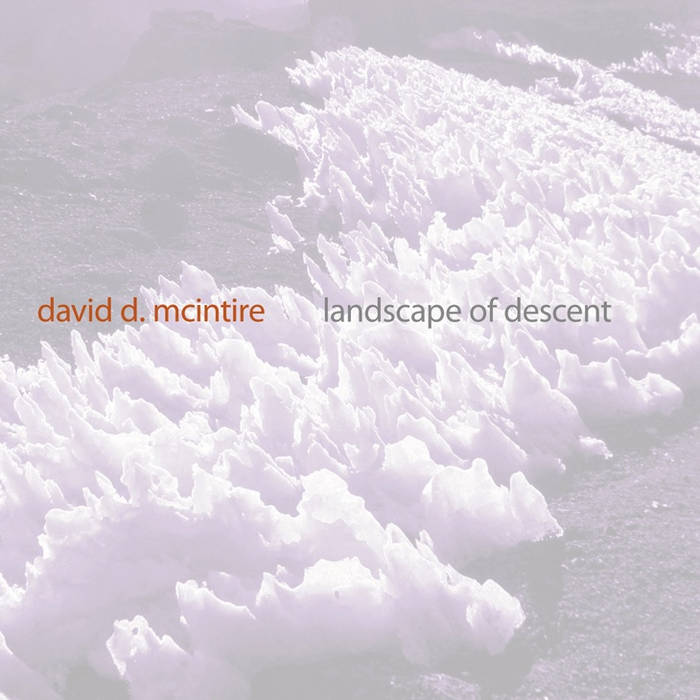 
Among the inventory of myth forms, the descent must be ranked as among the most enduring and powerful. The upper Paleolithic drive to paint in subterranean caves; the passage of Orpheus, of Odysseus, to Hades, Socrates’ epic conversation down in the Piraeus that we know as The Republic, and later, Dante’s mid-life journey into Hell – these examples come immediately to mind. The descent, or katabasis (Gr: for “going down,” originally denoting an expedition from an interior province to the coast), figures as the bench mark of heroic endeavor, a test of will and courage few choose voluntarily to undertake.

True to our own epoch, drained as it is of monsters and physicalized hells, David McIntire’s Landscape of Descent approximates this paradigm in acoustic form without any explicit programmatic reference, aside from the title. Remarkably, he has achieved the emotional resonance of katabasis entirely from the manipulation of a single sample of Christmas bells, time-stretched to various lengths and then layered, one iteration on top of another. Landscape sounds at once both familiar and alien. The glassy, falling shards one hears initially, after an opening few minutes of silence (which I entreat the listener not to skip over), gradually swell, ebb, and fold themselves into every imaginable form of tintinnabulation, from heavy wet cowbells to furious hosts of rhythm logs, sidereal gourds, Aeolian harps: a bestiary of idiophones that summon a range of associations one typically experiences only at night, during that vestigial descent into a personal underworld of dream and desire. In long cambered periods, at turns subtle and clamorous, we find ourselves moving through an acoustic environment for which there are few if any maps, littered with the moraine of great symphonic corridors long abandoned, where melody has retracted into its own De Profundis, carved out of schist and floe and reverberant debris.

At times the results of the digital processing give rise to a sound very like wind. At others, one can make out water falling into a receptacle. Here and there whispers and murmuring break through like the acoustic hallucinations that haunt the white noise generated by small household appliances. These adumbrations of ritual utterance, like all of the “effects” that fall out from McIntire’s brilliantly simple structure, evoke the turbulence of natural processes, a “wake” of micro-detail that induces a confusion both unsettling and unsettlingly pleasurable: are these sounds natural or man-made? It seems both impossible and urgently important to decide. Like one of those pictorial illusions: goblet or two silhouettes? Crone or young woman? Where are we, exactly? This “landscape” – its horizon or ground subsumed by ever new layers of processed bells – occupies a mysterious zone between stable categories. Likewise, as it drifts back and forth across the stereo field, the environing space from which the bells emerge also seems to advance and recede with respect to the listener. These shifts of background values have the effect of destabilizing the distinctions between near and far, interior and exterior, psychical and objective, slowly enough, however, that a sense of “container” or “place” is never quite lost. The landscape remains strangely real, habitable. Yet, rather than suggest a familiar milieu, the piece instead subtly dislocates one’s psychic space of repose, the net effect of which compels a removal to more remote accesses of memory and feeling. Another way to say that Landscape of Descent cannot be categorized as ambient music. One finds oneself giving his entire person over to it.

And though we needn’t know the compositional process in order to enter Landscape, still, that this richly evocative environment is made all the way through from a single brief sample certainly must stand as a testament to the composer’s artistic resources. He has, by eschewing easy virtuosity and tempering the nearly infinite plasticity available to the digital composer, succeeded in delivering us a music that sounds at once both very new and very old, which in the boundlessness and intensity of response it is capable of eliciting, can only be described as the exemplum of a Kantian acoustic sublime.

At around the 47’ mark, a singular transfiguration of the bells into a large high pitched chorus-like Sirroco recalls, though from a distance, the spirit of Penderecki. Like voices coming from beneath the ice of Cocytus, they grow more resonant and eventually resolve to single chord, an uncanny distillation of all sounds from the depths of time, and beyond the ability of any tonal system to describe. By the close, this universal chorus has been reduced to a low wind moving over some remote Homeric ice field populated with hungry ghosts – a place where dusk is a paradox of severe light forever dying away, yet with no promise of darkness. The voices have vanished. Only wind remains. A wind that once was bells.

All the way down.

Landscape of Descent was composed and realized in Kansas City, January-February 2005, with additional mixing and revision March-December 2011. Multi-channel versions are existent as well.

The cd of this work is a limited edition, with a run of 100 signed and numbered copies.