Randy Gibson: The Four Pillars Appearing from The Equal D under Resonating Apparitions of The Eternal Process in The Midwinter Starfield 16 VIII 10 (Kansas City) 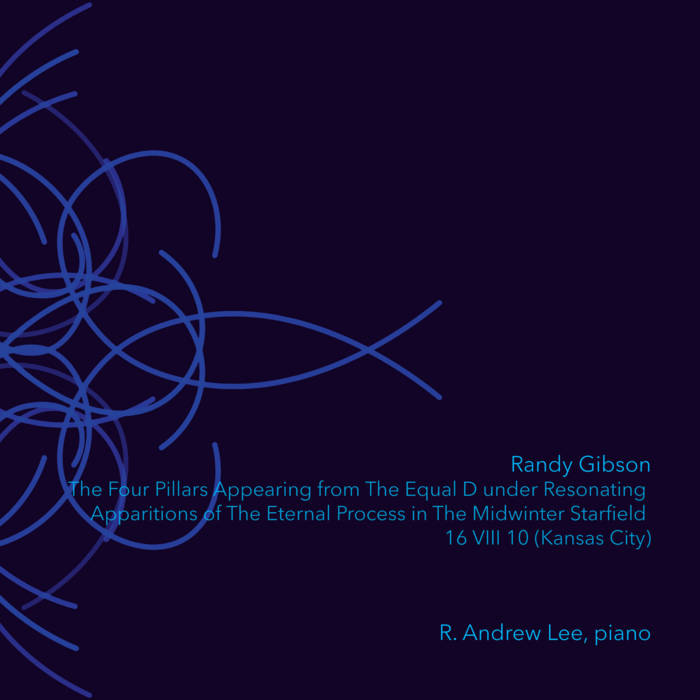 For the past two decades, scholars have been attempting to define what has variously been called the “Eccentric,” “Experimental,” or “Maverick” tradition in American composition. David Nichols noted that it was a tradition that adopted “an unprecedentedly wide variety of supposedly exclusive musical styles.” Michael Broyles identified it as dealing with “the strongest and most sacred myth of American society, that of rugged individualism.” And Kyle Gann pointed to the “tradition of anti-traditionalism, a tradition of not giving a hoot about tradition.” Yet all three scholars noted that despite a collective need to be iconoclastic, there are strong threads of influence that run in the warp and woof of American music. And nowhere is that influence more robust than in the search for new sounds.

In 1917, William Braid White published Modern Piano Tuning and Allied Arts in which he demonstrated how tuners could count beats in tuning up to two decimal places and use comparative intervals to create a truly equal temperament for the first time. But while the resulting sounds allowed for easy modulation and Schoenberg’s development of the twelve-tone system, it did so by sacrificing color and nuance. So little wonder that American composers fascinated by sound itself immediately began pushing back against equal temperament just as the rest of the Western world embraced it. The same year White published his tuning tables, Henry Cowell began scribbling down the first ideas that would become New Musical Resources, his 1930 book that proposed to radically reorganize musical materials around the overtone series. He advocated for new harmonies based on tone clusters and new rhythms built from the vibrational relationships of sounding tones. In 1923, a translation of Hermann von Helmholtz’s On the Sensations of Tone transfixed Harry Partch, who adopted just intonation in response. By 1928, Partch was dividing the octave into over forty unique pitches; writing the first draft of Genesis of a Music to explain his philosophy and tuning practices; and creating the Adapted Viola, the first among over forty instruments he built to sound his scale and communicate elemental truths. In the late 1940s, John Cage began studying with Gita Sarabhai, who urged him to “sober and quiet the mind thus rendering it susceptible to divine influences.” He then read Ananda K. Coomaraswamy’s The Transformation of Nature in Art and began divining the connections among art, music, and spirituality, ultimately dedicating his life to “discovering means to let sounds be themselves rather than vehicles for man-made theories or expressions of human sentiments.” This appreciation for sound itself in turn fired La Monte Young’s imagination, and in the early 1960s, Young began experimenting with long drones and alternative tuning systems, ultimately becoming a disciple of Pandit Pran Nath and creating works that merge Eastern thoughts of music as an expression of its tuning and existing in an eternal present with Western ideas of music as directional development of themes.

And so we come to Randy Gibson and his work The Four Pillars Appearing from The Equal D under Resonating Apparitions of The Eternal Process in The Midwinter Starfield - for Equal Tempered Piano and Harmonic Resonators. Gibson began his musical life as a percussionist, which introduced him to Cage’s expansive catalog for percussion. After hearing a recording of Cage’s Ryoanji for solo instrument and percussion obbligato, he became obsessed and knew he needed to become a composer. He tried his hand at graphic scores and chance procedures, and while he appreciated the way Cage’s approach removed so many of his limitations, he found they were not communicating his inner voice. He thought college might be the answer, but after only a week of schooling, he left, packing his bags for New York. Gibson finally found the key to his musical style when he began studying with La Monte Young in 2003 and embraced just intonation, drone-based composition, and a ritualistic musical environment. After six years of working with Young, Gibson stretched out his wings and began working on his own set of tuning theories that he calls The Four Pillars, forming the harmonic and conceptual basis of all his work. “La Monte helped to clarify the situation for me,” Gibson has observed, “to allow the space for my sounds to be their own.” That casual conflation of Cage and Young is not accidental or incidental. Gibson’s music is a fierce and ear-opening exploration of a small set of sounds that, in its exploration of the overtones of just intonation, take his heritage even back to Cowell and Partch. It places him in a dialogue with those Experimental composers and in a grand tradition of iconoclastic composer plumbing the depths of sound to, as Rebecca Lentjes has noted, offer “a glimpse of time outside time.”

With his devotion to just intonation, most memorably for piano in Aqua Madora, it might seem surprising to find the present work featuring an “Equal D” in its title. But as you read in Andrew Lee’s essay, it quickly became clear that Lee’s touring would preclude constant tuning of a piano in just intonation. So Gibson arrived at the graceful solution of building off the overtones produced by a single note. Removing all but the seven Ds on the piano from the work’s timbral palate also removed the impure intervals that exist on an equally tuned piano, allowing Gibson to play with just intonation in the electronics.

However, The Four Pillars Appearing from The Equal D... is not only about its composer – this is a work that in true Cagean fashion is just as much about its performer and its audience. Gibson found an ideal interpreter in Andrew Lee, a performer with the technique and musical nuance to craft a compelling and transfixing musical experience over three and a half hours. Gibson gave Lee permission to collaborate with his ideas in real time, but not to do whatever he wanted. Instead, Lee works within the structure and timing Gibson has created, listening and responding to the sounds that swirl above him.

As you become a virtual audience member with this recording, you also have to listen and respond in new ways. From the opening gong-like sound of a ringing D in the middle of the keyboard, you are transported to a new reality. Gone are the traditional markers of melody and regular metric pulse, and in their place are harmonies and harmonics that extend above and below the piano’s pitches. Gone is the need to focus solely on the piano’s notes, and in its place is an expansion of focus to the include the resultant sounds above those notes. Gone is the goal directed trajectory of Western harmonic practice, and in its place is the timelessness of the now. Gone is the moment-by-moment expression of surface emotion, and in its place is the revolutionary power of sound as it moves around and through you, its vibrations literally reshaping your physical and spiritual being. You must trust this music, give over your expectations, and actively participate in the work’s creation. If you can, after three and a half hours in the hands of Randy Gibson and Andrew Lee, you might just find yourself not only changed, but truly transformed.

Recorded live in a single unedited performance (with all electronics realized in real time) on Wednesday, August 10, 2016 on the Richard Cass Memorial Steinway in White Hall, University of Missouri-Kansas City.

The Four Pillars Appearing from The Equal D under Resonating Apparitions of The Eternal Process in The Midwinter Starfield © 2013-2016 Randy Gibson. Published by Golightly Music (ASCAP).