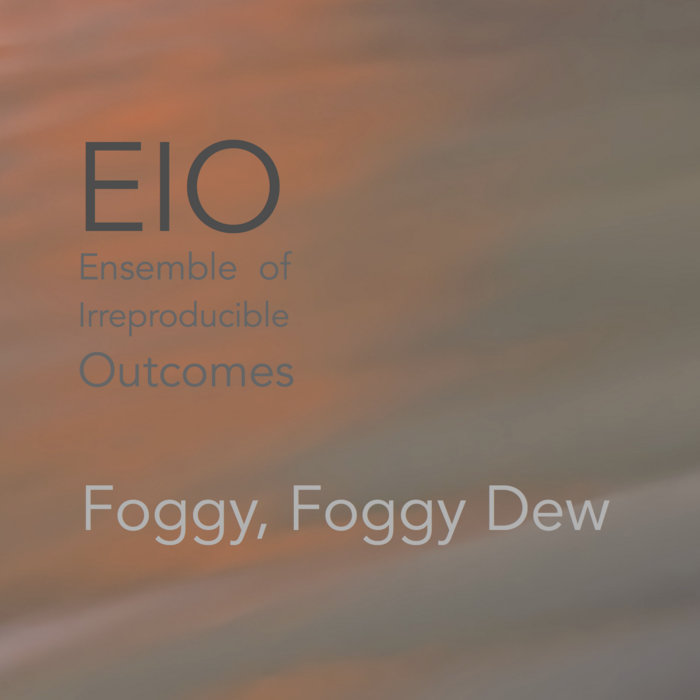 Foggy, Foggy Dew was the second piece that EIO rehearsed together as an ensemble. I had learned the tune by ear years earlier, from an arrangement by the prog saxophonist David Jackson.* We quickly found that its modal melancholy was filled with endless expressive possibilities, and it was deeply satisfying to play together. We always included it in any rehearsal. When we were recording our album Memory and Weather, we did ten complete takes of this piece. The versions presented here are not part of the “official” album, but we felt that they all had many lovely moments that we wanted to share.

The score I devised isn't an “arrangement” as much as a path for the three of us to follow; a map with vague coordinates. In each of these takes, we play through the tune exactly once, using the melody to construe riffs and patterns, while listening to each other. The approach is similar to that of Terry Riley with In C, except that here each player creates their own cells in the moment, and they change with each performance. There is no discussion of “how we should play it this time” beforehand.

In this collection we present seven takes of Foggy, Foggy Dew (plus the original tune as I learned it), each quite different. This seemed important, in order to reveal the elasticity with which we approach this piece; there is no one representative version. We take a vérité approach in the recording, no editing or overdubs. One is acutely aware of three musicians, in a room together.

* We have since learned that the song is actually "The Foggy Dew," an Irish lament associated with the 1916 Easter Rebellion. On the David Jackson album ('Jackson, Banton, Evans'), "Foggy Foggy Dew" was the title used, hence our usage. Jackson explained in an email that he had learned the tune from a booklet of music that came with some Irish whistles that he had bought. The tune is actually (originally) known as "The Moorlough Shore," but has other names as well. At this point, we're not changing the title, but we didn't want to sow more confusion.