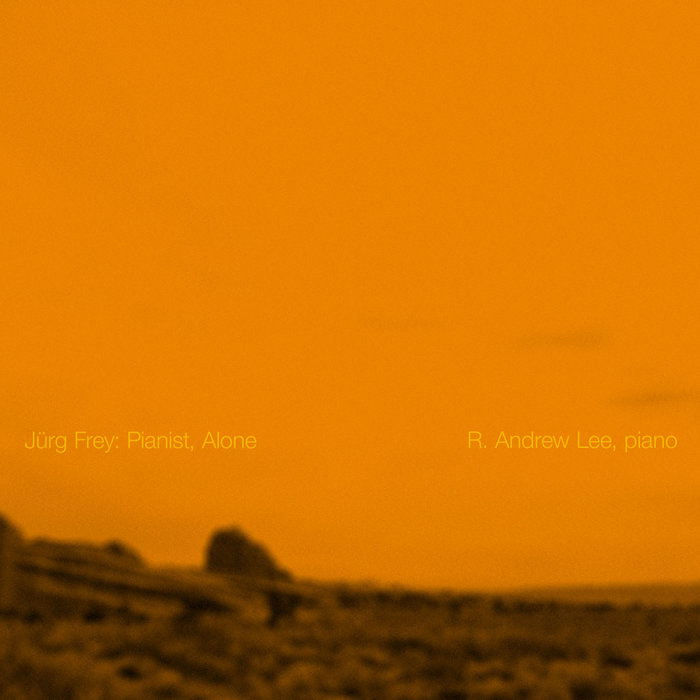 George Wallace Had the pleasure of attending Andy Lee's performance world premiere of "pianist, alone (2)" at CalArts in September 2013. Hearing it again now, it re-strikes me as uniquely, if quietly, stunning. Man music mechanism: all engaged in a pure probing of sonic possibility. Essential, restrained, ultimately rapturous.

pianist, alone: Isn’t this usually the case? The lone virtuoso saunters on stage, sits at the keyboard, and unleashes a torrent of sound, sonatas, etudes, and mazurkas. The audience sits, rapturous, and occasionally bursts into applause. The hero is victorious.

pianist, alone: But this is not the aloneness that Jürg Frey seeks. Frey’s title suggests both instrumentation and philosophy. The pianist is not only alone in the concert hall or recording studio; he is also alone in a grander sense. Frey sheds the world-historical baggage of the piano, the weight it carries as part of a tradition stretching from the 'Goldberg Variations' to 'The Time Curve Preludes.' The piano here is the bearer not of tradition but of timbre, of pure sound. As the music unfolds over nearly ninety minutes, it contains no relation to the past or the present: Frey’s music refers only to itself.

pianist, alone: We hear an alternating series of open intervals, fourths and fifths. It is a kind of hollow version of first-species counterpoint, the first set of techniques acquired by a beginning composer, though Frey discards any semblance of the rules of the 18th-century. Leaps are rare; fifths sometimes resolve to fourths by step, one voice moving downwards while the other stays. When the slowly contouring series of chords peaks, an octave above where it began, there is no climax to the moment, no emotional weight. The notes gradually descend again. Twelve minutes have passed.

pianist, alone: It is, too, an instruction to the pianist. Frey writes of his ideal performer that “The interpreter deploys his mastery of the instrument to achieve a virtuosity consisting in producing sounds in such a way that he himself disappears and all that remains is sound in space.” Stravinsky similarly referred to his performers as executants, dismissing interpretation as a deformation of his music. The aloneness of Frey’s pianist exists in his ability to discard his own personality and produce only sound.

pianist, alone: An event occurs. Or, rather, the perfect intervals cease. We are ripped from the open, ethereal sound-world of fourths and fifths to a closed, minor third, played at the very bottom of the piano. The overtones create a rumbling roar; Frey subtly, relentlessly varies the rhythm of each repeated diad. The fifths finally return, acquiring a new brightness in contrast to what came before. There appears to be a new, recurring sequence, a pattern of eleven chords that Frey cycles through eclectically, adding and subtracting at will. Twenty minutes have passed.

pianist, alone: Frey, too, instructs his listener: if the pianist is alone, where is the audience? He recalls an earlier era, before the advent of the piano recital, when the keyboard was an instrument found and played in the home. Performance meant playing alone. Listening to this recording offers an experience that—if not mimicking the act of playing Frey’s music oneself—offers an approximation of the solitary nature of Frey’s music.

pianist, alone: A single note stabs over and over. We hear not only the pitch but also the sound of the mechanisms of the piano, the ambiance of the recording studio, the dull ping of flesh hitting plastic. It recalls the undying fourth that repeats 468 times in Frey’s 'Klavierstück 2.' The composer has now established a non-pattern: an alternation of the open fourths and fifths with ever-new sonic events, markers of change without change. Twenty-nine minutes have passed.

pianist, alone: The composer writes that “With this music, we do not have a memory of moments of particular intensity after the concert. The situation is not at all shaped by memory.” The listener comes to anticipate that something new and wildly unexpected will arrive without foreshadowing. A sense of mystery accrues. Will we hear a Debussy-like wash of grandeur, with a recurrent A-flat paired with a note either more than two octaves above or nearly two octaves below? Or a seemingly endless minor second, which through its close interval creates a tinnitus-like shimmer? The patterns provide us with a beguiling amount of information: only enough sonic data to know that something will eventually happen, but not what, or when.

pianist, alone: Most audacious is a D-major scale, which rises out of nowhere, ascending one note at a time. As each note unfolds, the sense of indignation accumulates: “Is he really going to do it?” The system of signs that Frey has established, the ceaseless repetition of the unpredictable, the deliberate refusal of conventional harmony, renders a simple scale wholly uncanny. Eighty minutes have passed.

pianist, alone: Michael Pisaro recalls one early meeting of the Wandelweiser collective in 1995. In Burkhard Schlothauer’s atelier, several musicians recorded their own realization of Christian Wolff’s 'Stones,' a piece which asks its performers to make sounds with rocks. According to Pisaro, Frey decided “to hinge a few of his sounds upon actions by others, unbeknownst to the people playing.” He ended up rubbing two stones together for half an hour. “At the end of this Jürg was covered in white dust,” Pisaro writes.*

pianist, alone 2: For nearly a decade, pianist, alone stood alone. But as part of his ongoing collaborative relationship with Frey, R. Andrew Lee is the first to record its sequel. Heard after its predecessor, 'pianist, alone (2)' is surprising, at times startling.

pianist, alone 2: The pianist is less alone; a specter lurks. It resembles a more conventionally fitful kind of music, one with harmony and a wistful sense of motion recalling Satie. The floating, two-voice opening reveals itself, subtly, to be a skeletal but strict series of canons. The bare textures are filled in with chords of up to six voices, occasionally progress in manners resembling traditional tonality. There are no hammering reiterations; at one point, a repeating two-note diad even has a slow, lazy melody unfurl atop it. A glassy solemnity manifests itself. Thirty minutes pass, quickly.

pianist, alone 2: Frey e-mails Lee: “The music has sometimes a flow and a phrasing, which didn't happen before.”