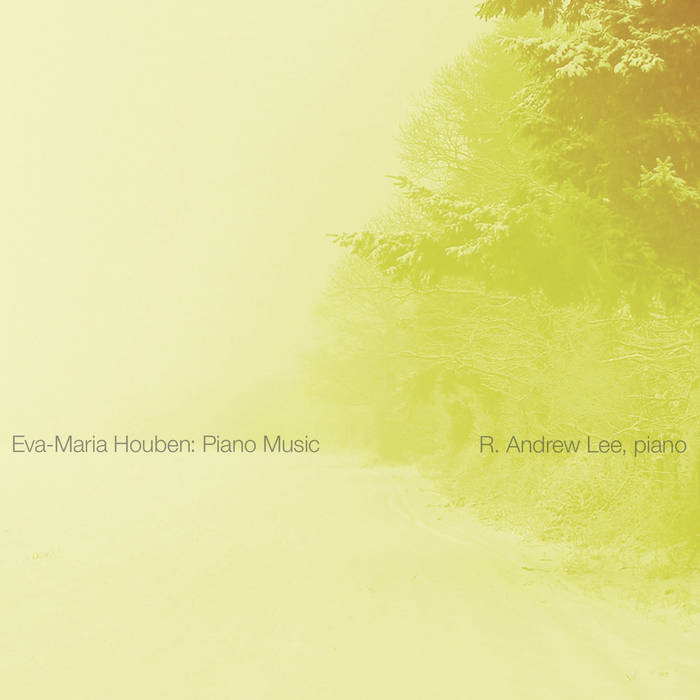 ryan Potent sparsity that rivals Morton Feldman - more silence than not. Substantial chords that lean forward all the way through.

“Fading sound is the link between life and art; between perception in daily life and perception while performing, while composing.

Halfway through Eva-Maria Houben’s abgemalt, the pianist unfurls a simple, delicate filigree of three notes: from C to D to E and back again, a careful meander that repeats without exactitude. In the bass, an F# lingers, creating a subtle, non-confrontational dissonance. The turning gesture ends on a D, left briefly hanging in space, before the pianist begins a new phrase.

Houben is an archaeologist of silence. She is a musicologist and a composer; her study of the past fuels her experiments in the present. In her publications, Houben has excavated the historical silences, drawing attention to a past canon of unheard moments, stretching from John Cage to the Second Viennese School to even as far back as Berlioz and Bruckner. Snippets of non-noise between the movements of a symphony anticipate the silent experiments of Cage; Berlioz’s indication of “presque rien,” “nearly nothing,” in his scores points towards a future practice of musical silences.

Summoning these past silences, Houben pushes forward with her own, making her listeners acutely conscientious of how the sounds she has composed blend into the silences that she has also written, and how both of those then blend into life outside the concert hall. Fred Moten has written of the “very intense relationship between experimentalism and the every day”: the way that for Cage and his heirs, art tended to bleed over into life. For Houben, sound bleeds into silence, and silence leaks out into the world (or, rather, allows the world to leak in).

That tender moment in abgemalt – which translates roughly into “painted out” – could be played by any amateur pianist. But it also could not. The difficulty in this piece, for performer and listener (and liner-notes writer, for that matter) is the act of forgetting time, of discarding clocks and tweets and Google Alerts and basking in what is manifested over forty minutes of stillness.

abgemalt is subtitled “drawings for piano,” and each page of the score contains a series of individual, gem-like creations: a lone, held note; two repeated chords; or a long, languid melody of seemingly disconnected notes that span the range of the instrument. Houben seems to compose in calligraphic strokes, alternating between immobility and tracing broad arcs across the keyboard.

At the same time, there is an incredible precision to the sounds that Houben conjures. She has devised her own indications to show the performer how to properly foster her soundscapes. In exploring the acoustic properties of the piano, Houben pays careful attention to the realities of sound. If she wishes a low note and a high note to sound for an equal length, she indicates that the pianist should repeatedly play the higher pitch until the sound of the lower one has fully died out. A more utopian composer might simply indicate that both notes should be held with the pedal, unaware that the higher pitch would fade away much faster than the lower one. Houben resists these unintentional silences. By considering the implications of her notation, she also forces the pianist to pay attention to exactly when a sound ends and a silence begins.

Throughout abgemalt, droning pitches appear in the depths of the piano, slinking downwards to the lowest notes on the keyboard. To my ears, they recall one of Schubert’s final works, the great B-flat sonata. In Schubert, a rumbling trill intermittently interrupts the autumnal flow of the music, jarring the music to a halt; in Houben, the opposite effect happens, with icy melodies breaking up the calm of the low.

That play between motion and stillness forms the basis of Houben’s 2002 go and stop, whose title recalls the matter-of-factness of word pieces by composers like La Monte Young. Houben’s music does what it says: she switches between alternating patterns of repeated chords and bouts of silence, seemingly at random. Low drones anticipating abgemalt introduce these sequences of chords and seep into their sound. The chords—with as many as six voices—are rich, almost Brahmsian, but linger without clear progression; the music flows not towards a harmonic goal but towards silence.

Towards the end, the silences disappear, and the music becomes saturated with unrelenting, alternating chords in a repeated sequence. The piece concludes in the middle of one of those sequences. go and stop appears to refer not only to the local level of progression and halting but also to the music’s broader shape; it went, and then it stopped. What remains afterwards, for Houben, is perhaps as important as what came before. “Why should the music stop when what I have written has stopped?” she seems to ask. The indication “zeit lassen…” or “leave time…” appears frequently throughout. It tells the performer to insert gaps of silence into the music, but it also tells the listener to leave old considerations of time behind.

In his seminal study of experimental music, Michael Nyman writes that “The experimental composer is interested not in the uniqueness of permanence but in the uniqueness of the moment.” As a member of the Wandelweiser collective, Houben belongs to the legacy of the moment. Though the same chords occur again and again in go and stop, there is no permanence to their harmony; each moment feels uniquely separate. Early in abgemalt, the pianist fixates on a single chord for five minutes. It never occurs again.