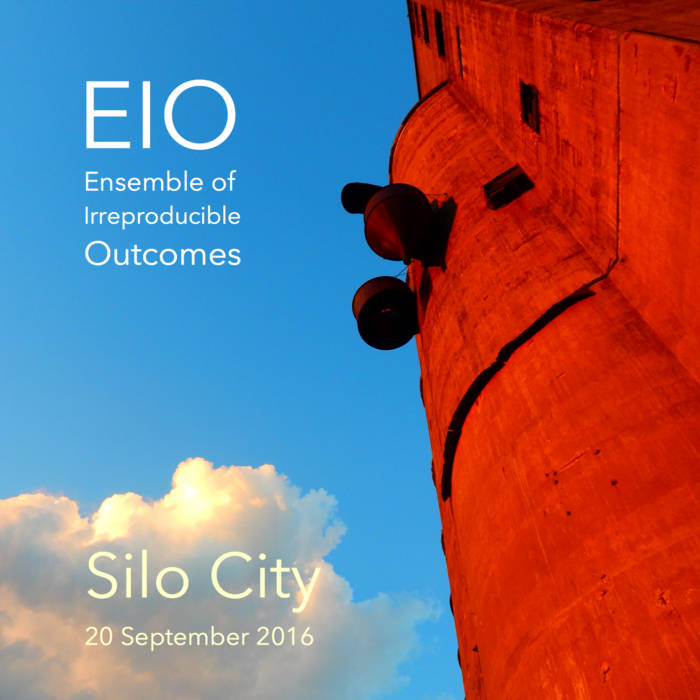 The nature of any music is determined by the acoustic space in which it dwells. Much of what we do in EIO is connected to exploration of musical spaces, both real and imaginary. With this audio document, we share our encounter with a space that surpassed our imaginations.

I first learned about Silo City at a Missouri composer's symposium in the summer of 2016 and immediately moved to add it to our upcoming tour itinerary. The possibility of playing in an immense grain silo was irresistible. Silo director Jim Watkins replied generously to my inquiries and we were scheduled for September 20th.

Playing in this space was an exhilarating, astonishing experience. We felt an instant connection to the acoustic response the silo provided and it became an additional instrument that we played together. Its reverberation allowed us to perform pieces like In Search of a Basilica and This B is for Brian without the usual electronics. Due to the extremely dim light, we refrained from any pieces we could not play memory. Tracks 3-5 are solo and duo improvisations, another departure from our norm.

NB: This document of our 2016 performance of at Silo City is realized from two sources, a stereo recording made directly into my laptop with an Aventone microphone, plus the audio from Brian Padavic's video camera. Due to memory shortage, my laptop ceased recording about two minutes into “This B is for Brian,” and so that track is solely from the camera audio. Some audible clicks were present on this file, which I've tried to clean up, but there is a noticeable shift in audio quality (and perspective). By this means we can share the entire concert.

Tracks 1-6 comprise our official performance at Silo City. I'd begun recording as soon as we'd unloaded our instruments and I have included some of our explorations from when we set up and tested the the space with our instruments in various configurations. These "Working the Room" tracks display some of our discovery process that enabled that evening's performance.