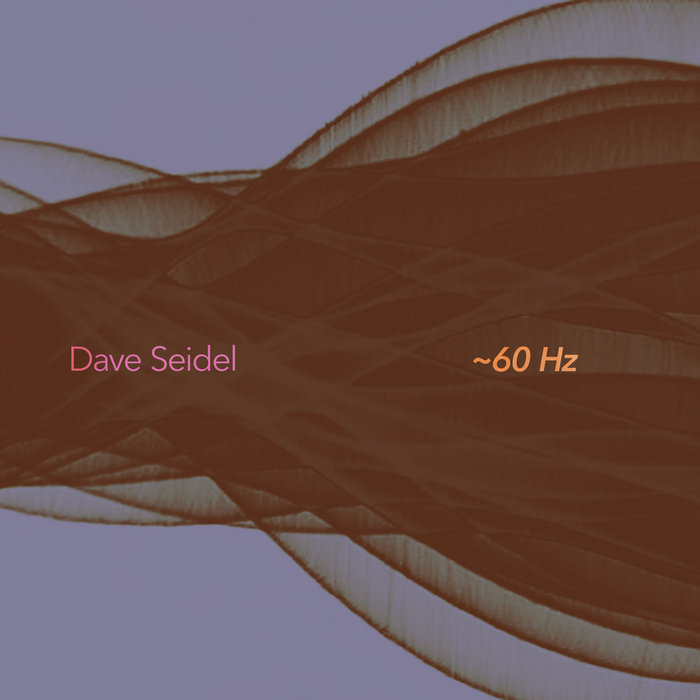 Almost pure sinewaves, because the little variations turning around the main frequency of each note gives the necessary feeling of movement to the release.

~60 Hz is a calm and peaceful album that demanding sound purists will absolutely love, and if you liked it, I advise you to complete your experience with Frequencies (A/Fragments) by Nicolas Bernier, composed with tuning forks. Favorite track: Accretion.

elizabeth veldon this album is simply...beautiful.

The Waveforms in Your Neighborhood

The operative information in the title is the tilde. The tilde means “sort of” or “nearly” or “in the neighborhood of.” What follows the tilde in the title are two digits and a pair of consonants, which collectively symbolize the neighborhood in question. What the “60Hz” refers to is a sine wave, categorically perhaps the simplest sound imaginable, a constant of equally balanced ebb and flow. The 60Hz does not merely refer to a sine wave. The 60Hz describes the sine wave succinctly. The contours of the sine wave are beside the point, because they are immutable, an eternal skatepark up and down and up that seems to have begun before time and that will continue after the heat death of the universe. What the 60Hz describes, however, is the nature of this exact sine wave, specifically what might more colloquially be referred to as its pace. The Hz in the title stands for the measurement Hertz, which is the number of wave cycles that occur in a single second. Thus, a 60Hz waveform cycles through 60 times in one single second.

60 per second of anything may signal speediness, but 60Hz proves quite lulling. The wave veers up and down, weaving sonic wool, a thick blanket of hazy warm noise that the ear succumbs to, and then the mind, and then the body. If the wave resembles the distant hum of a power line, that is because 60Hz is the standard frequency of the power infrastructure in the United States. If it does not sound like the whir of municipal undercurrent, that may be because you live elsewhere. Even waveforms have terroir.

The tilde in the title is the operative information because the tilde means that the sounds heard will, in fact, not stick to the 60Hz frequency. They will, instead, hover around 60Hz. What the little tilde means is that the listener will witness the resulting shifts and hedges, veering and layering, collisions and parallels as waveforms are added and set in contrast to each other. These contrasts will yield all manner of aural patterning.

In lesser hands, the patterns would have all the gee-whiz lab-coat charm of a 1950s stereo system vinyl test album. But these waves are not in lesser hands. They are in Dave Seidel’s hands. What we hear is the simplest sound form yielding myriad, tantalizing moiré patterns. Some of these patterns suggest the fervid activity of insectoid communication, others the humble drone of a mumbled mantra. There are pointilist percussive effects, and tones like nothing so much as a masterful solo organ recital. There are phase shifts like a Steve Reich violin piece, and torquing structures like an industrial rock band playing its third encore on the last night of a tour.

And there are echoes, of course, of science fiction. This is electronic music in the purest sense, electricity revealing itself as sound — science transmuted into art. One hears Bebe Barron and Louis Barron’s work on the Forbidden Planet soundtrack. One hears the note accrual inherent in the opening of the original Star Trek theme. One hears the hum of a lonesome space station while its inhabitants are deep in a timeless, cryogenic state.

For all the associative mind games, what is heard is simply a handful of notes taking the concept of minimalism at its word. The operative information in the title is the tilde, the tilde that itself rightfully resembles a tiny typographic sine wave.

I am indebted to La Monte Young (via Kyle Gann's writings) for the concept of 60Hz as a tuning base, a practice that has suffused my work since I first learned of it. Young is also my primary influence in the use of rational intonation and sine waves. Henry Cowell's idea of rhythmic patterns based on pitch relations inspired the binaural beating patterns I employed through this piece.

More generally, I am continually inspired by, and learning from, the musics of Eliane Radigue, Laurie Spiegel, Mary Jane Leach, and Lois V Vierk.

Many thanks to the Audacity and Csound development teams and Steven Yi (the author of the compositional software environment "blue") for providing the wonderful open-source tools that I employ when I use a computer to make music.

Finally, thanks to Kathleen for her continuous support, and for putting up with a lot of strange sounds and an iterative compositional process that is probably somewhat maddening to anyone who doesn't live inside my head.

NB: ~60Hz makes extensive use of binaural beating; the piece is best experienced if the user listens with headphones, or as close to the focal point of a pair of good stereo speakers as is possible.

Realization and mastering by Dave Seidel.