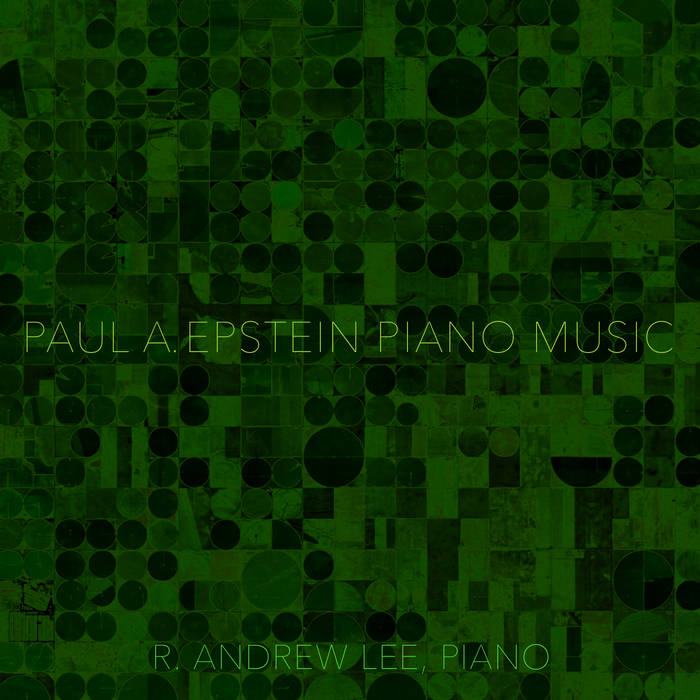 The music of Paul A. Epstein confounds those who might attach a straightforward narrative to postwar composition, one in which serialism is triumphantly superseded by minimalism. Though Steve Reich and Philip Glass disparaged composers that embraced dodecaphonic music—Glass referred to the European avant-garde as “these creeps making everybody play this crazy creepy music”—the reality is more complicated. For starters, the inaugural work of early minimalism, La Monte Young’s Trio for Strings, is steeped in twelve-tone technique. And for the past several decades, Epstein has crafted intricate compositions that draw equally on the transparency of the minimal and the opacity of the serial. On this album of recent piano works, we hear a voice saturated in the minimalist canon, with works inspired by Glass, Sol LeWitt, and Tom Johnson. We also hear a composer carefully engaged with the theoretical games of the midcentury modernists, one whom Kyle Gann has called “the Milton Babbitt of postminimalism.”

Attune your ears, for example, to “72: 7/11/13.” A stream of sixteenth notes washes over the listener, soon joined by a methodical cantus firmus. One could imagine this sonic arc stretching on forever into a harmonious horizon, but it is soon interrupted: Epstein lifts the pedal, and the music is suddenly jagged. Though the stream continues, it is diluted with breaks and pauses. Brittle and hollow, punctured by rests, the music becomes quizzical, self-absorbed, even—to draw willfully on that most-clichéd descriptor of serialism—thorny.

These interruptions, and the music’s metamorphosis from placid to pointed, are built into one of Epstein’s typically complex compositional frameworks. The stream is a 72-note repeated pattern, with the slower, left-hand line created by pulling every 7th, 11th, or 13th note from the faster melody (what Epstein calls, after Johnson, a “self-replicating” melody). And the original pattern is itself subjected to a pre-determined transformation, as individual notes are replaced by rests. These two schemes, duplication and filtration, combine such that the original and the replicant eventually sound identical.

“I want to be able to hear the process happening throughout the sounding music,” Reich famously declared in his 1968 essay “Music as a Gradual Process.” The implication was that the elaborately mathematical structures of total serialism had rendered the listening experience inert and pedantic, driven more by academic egotism than a desire for sonic pleasure. But what’s so great about audible process, anyway? “72” suggests something for everyone: the casual listener is drawn to its baffling narrative, the music theorist to its arithmetical secrets.

That willingness to embrace process that cannot be perceived by the listener is a hallmark of how Gann defines postminimalism—a term that, like minimalism, Epstein comfortably applies to his own music. His work as a music theorist has, too, informed his composition; a 1986 analysis of “Piano Phase” not only shaped how we listen to Reich today, but also allowed Epstein to harness an understanding of the inner workings of minimalist procedures in order to craft his own. In his “Drawings” series, Epstein takes after Sol LeWitt’s exploration of “all possible combinations” of visual materials; he creates a musical grid and flips it, such that the interval between pitches becomes the temporal distance between notes, and vice versa. (The gesture recalls what Gurnemanz utters in Wagner’s ur-minimalist Parsifal: “Here time becomes space”). This device is imperceptible, at least to my ears, but there is also something powerful in the act of imagining the rhythmic transforming into the harmonic. It makes for fascinating aural results, from the punchy No. 6 and pointillist No. 5 to the unsettled No. 4 and, most persuasively, the spaciously rippling No. 3.

“Landscape with Triads” manifests this album’s most unsentimental system. Epstein cycles through major and minor chords built on all twelve tones—presented in every possible inversion, but without any functional progression—serializes dynamics, and randomizes duration and articulation. Somehow the music sounds more cogent than ever, with a bold, almost Beethovenian beginning that proceeds through what feel like a series of missed cadences, with an occasionally jarring moment of tenderness.

Two selections from Epstein’s “Changes” series round out the album and echo his contemporary William Duckworth in their exploration of the bending of time. In the palindromic “Changes 3,” a long pattern is first presented in a contracted form and then subjected to additions and subtractions of notes; the short cell expands and then ebbs, as Epstein strips down his material and builds it back. Though originally written for melodica customized with a bagpipe bag—such that the repeated patterns hover over splendorous drones—here R. Andrew Lee has adapted it for piano by holding notes silently to create sympathetic vibrations (a technique itself derived from Duckworth’s Time Curve Preludes). “Changes 6” is muted and contemplative, based on two foundational streams of minimalism—a sequence of five bells pealed in English churches, and a sequence of five pitches played in Glass’s “Two Pages.”

Epstein writes of the self-replication of “72” that “it has provided a way of reducing surface repetition while retaining the ‘limited means’ that remains for me a crucial aspect of minimalism and postminimalism.” The emotional weight of that piece’s final, lonely notes—stretched out and filtered until there is more silence than pitch remaining—strike the ear as having very little to do with pre-compositional process. Or, perhaps, everything.

2. Drawing No. 3 (Slow Title)
in memory of John Douglas

3. Drawing No. 4 (triangles, broken horizontal and vertical
lines, rectangles, and parallelograms)
to Tom Johnson on his 70th birthday

7. Landscape with Triads
for Andy Lee

8. Drawing No. 6 (horizontal and vertical broken lines)
to Kyle Gann

To Kyle Gann for many years of enthusiastic support and encouragement.

To Adele Epstein for more than fifty-five years of companionship and invaluable criticism.
_________________

Recorded July 2014, on the Richard Cass Memorial Steinway in White Hall at the University of Missouri-Kansas City, in the composer's presence. This project is supported in part through a grant from the Philadelphia Chapter of the American Composers Forum.