from Chronomosaic by David D. McIntire 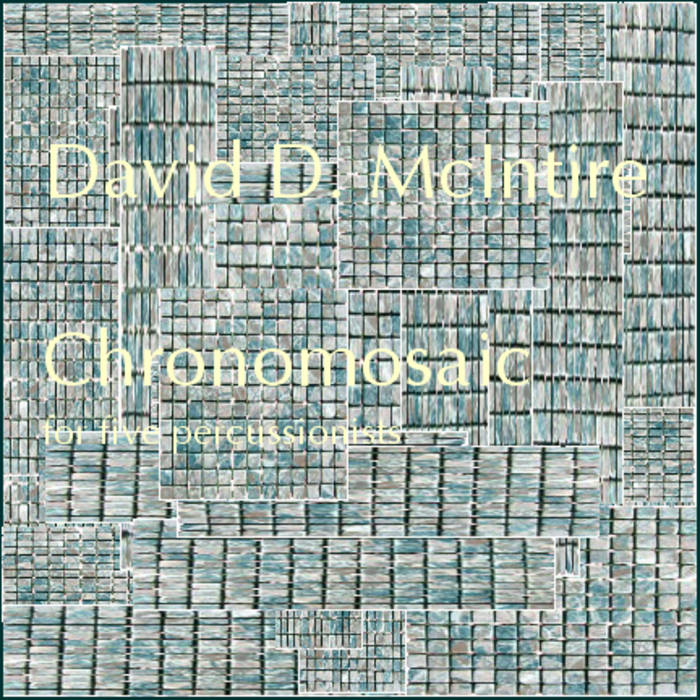 As the title implies, this piece seeks to create a mosaic of sounds, laid into time. I had the idea of writing a work that explored the notion of interlocking “tiles” of rhythm and color, somewhat akin to the way African percussion music employs interlocking patterns. The piece is largely comprised of a small number of rhythmic cells of different lengths which fold over and interact with each other in continuously changing ways. All of these cells or patterns have a common feature in that they are all rhythmic palindromes–they produce they same rhythm whether played forward or backwards. This creates great ambiguity as to what meter is actually being articulated. Although the piece is notated wholly in 9/8, one can scarcely discern this meter until the final bars.

The pitch world of Chronomosaic is ordered around two tone rows comprised of six pitches, rather than the usual twelve. This 6-note collection is a “Z-related” set and I refer to the matrix array as my collection of “Z-rows” as shown below. At this point, I was still intrigued by 12-tone technique to a degree, but I wanted to apply it more flexibly, deploying less than the full chromatic collection at any given moment. I've used this material in several pieces.

Chronomosaic also reflects my ongoing interest in exploring Fibonacci and “Golden-Section” related ideas, especially with respect to the matter of proportion and how this affects a listener's perception of musical time. All structural downbeats and sectional boundaries were planned around this principle. While Chronomosaic is among the most rational and pre-composed of my works, this notion of controlled proportion has remained an important facet of my compositional aesthetic, even when I'm writing more intuitively.

None of these technical matters should overshadow the fact that Chronomosaic was conceived to be a “groove” piece, and hopefully can be enjoyed as such.