from Pentecost by Scott Blasco 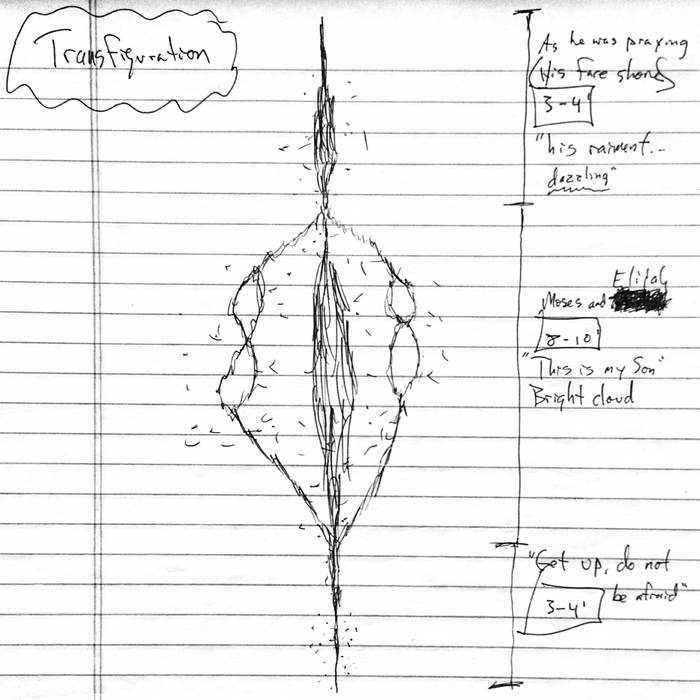 Transfiguration is the second of a planned triptych of meditations on the interactions, the comings-and goings-and-union, between the tangible and spiritual worlds. The gospels relate the Transfiguration as the visible illumination of the depth of reality veiled in flesh in the person of Jesus: “his face shone like the sun and his clothes became white as light.”

Like its companion piece, Pentecost, Transfiguration is crafted from a simple sound source (in this case, a one-second contrabassoon sample). Following a pen-and-paper sketch, the work blooms from muted simplicity to a rich, layered texture before returning to a single tone, now flush with the afterglow of its brief metamorphosis.

I'd been thinking about this piece for a long while without doing anything about it, so this past winter I sketched it in its entirety during a cross-country flight. The oddly yonic shape of the sketch was entirely accidental, but is one of those things I can't unsee once I've seen it! I was thinking rather of the central line/band as the thickening cloud of light illuminating the physical Christ from within, and the side lines the secondary heavenly characters of Elijah and Moses.

As we've discussed, it is definitely influenced by my encounters with Eliane Radigue's music. She has become probably my favorite composer, which is terribly frustrating because it's so hard to actually find sufficient undivided time to listen to most of her music. I've never yet been able to sit down and listen all the way through Trilogie De La Mort, though I've been through the individual sections many times.

It is, like Pentecost, mainly "about" a meditation on a moment of encounter between the frail, perplexed, awed physical world and the eternal Divine. I'm planning to write one more to pair with them based on the Ascension, although I have some doubts about whether that quite works conceptually alongside Pentecost and the Transfiguration.

In terms of construction, the only sound source is a one-second clip of contrabassoon I recorded when Ryan and a student of his were playing in his office. I happened to be walking by and heard them playing low Cs and Bbs, and ran to get my recorder. Everything in the texture is built of filtering and pitch-shifting that clip looping for the full duration. I'm not sure what else to say about this piece right now. Maybe it's too freshly completed for me to have developed verbiage for it yet. I hope this is helpful, at least.