The Pornography of Unfettered Optimism 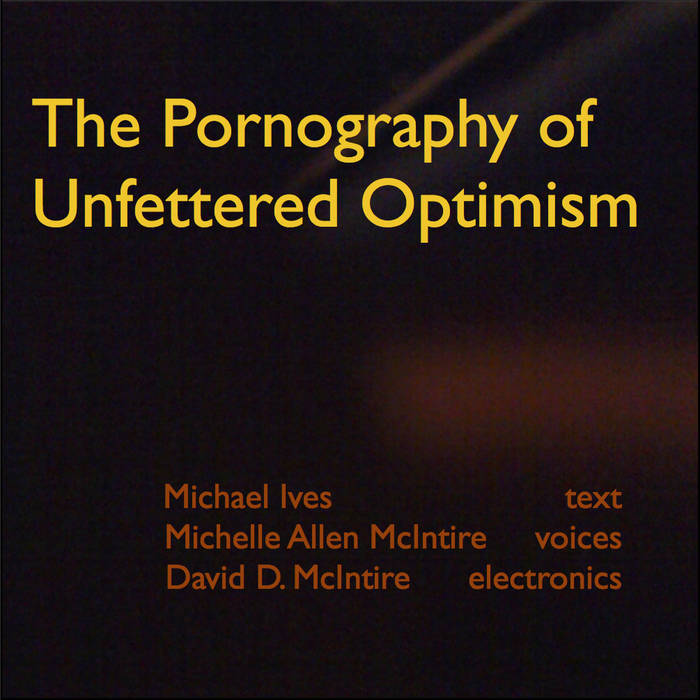 'The Pornography of Unfettered Optimism' is a setting of a poem by Michael Ives, with whom I have collaborated with since the mid-1980s. I take the poem to be an examination of the notion of "pornographic" in a broader sense than the commonly accepted sexual one, although that perspective is not ignored here. If one thinks of pornography as a depiction of a physical act in a highly exaggerated and mannered fashion, unmoored from reality or attendant emotions, then pretty much anything can be depicted "pornographically." Even optimism.

So go ahead: adopt that rabbit you've been dreaming of...

Michael Ives is a writer and teacher living in the Hudson Valley. His poems have been published widely in numerous publications and in the collection The External Combustion Engine (Futurepoem Books). He was a founding member of the noted language/performance group F'loom, whose work was featured on National Public Radio, the CBC and included in the international sound poetry anthology, Homo Sonorus. He teaches at Bard College.

The Pornography of Unfettered Optimism

If we can just agree on a name for the disease. And the disease will go away. Just like that. This can really happen. It already has. I feel great. I’ve decided to adopt a rabbit. I’m boiling my moods into a tallow of forgiveness. The grouse feeds from my palm. I grow familiar with twenty forms of cancer but recover the missing church key. Sectarian disputation ceases to captivate. I reorient. My conquering proclivities languish. I am made whole. By Japanese cuisine. My sense of smell ceases to alarm me. In the morning I practice a look called The Trepidator. The frank juice of spring, once frozen, surges again. I keep no fast, re-establish contact with enemies, split wood for the youth group. Mutuality is extended to the insects. And the criminals. Dad is moving in at the end of the month. Treason is on the decline. I enter the godhead, study Homer, condemn the sub-prime lending scandals. Inaugural sentiments prevail. My breath is as a melody to me, and my ongoing negotiations with society the Grosse Fugue. I disallow my debasement by mere facts, enroll in a geneaology workshop. Fear soon melts into its joy-based pre-adhesive. I garden. My ego splashes in all the positivity. Composed of smaller, localized negations. I describe the play of shadows across my shell collection in careful journal entries. Dated according to a revolutionary calendar. More and more people can afford insurance. And to junket in the Caribbean of their earnestness. The earth is magnetized by my subject position. I break the bough over my knee. My knee can be replaced. And shall be several times. Before I am inhumed. In the earth my mother. Words unfurl effortlessly in front of my exertions. When I cross them out, I stripe their backs with welts. Like a dangerous lover testing some threshold. Your belittlement of my efforts builds our betrothal. Centuries, vast like tables, connect us to everything. I’m thinking of nothing but beet sugars and plus signs. The dark is going out of the sky.

Composed and realized at the composer's studio in Kansas City, MO, over a period of a year or more. First complete presentation at Electronic Music Midwest, October 2011. Additional mixing and treatment followed that performance.