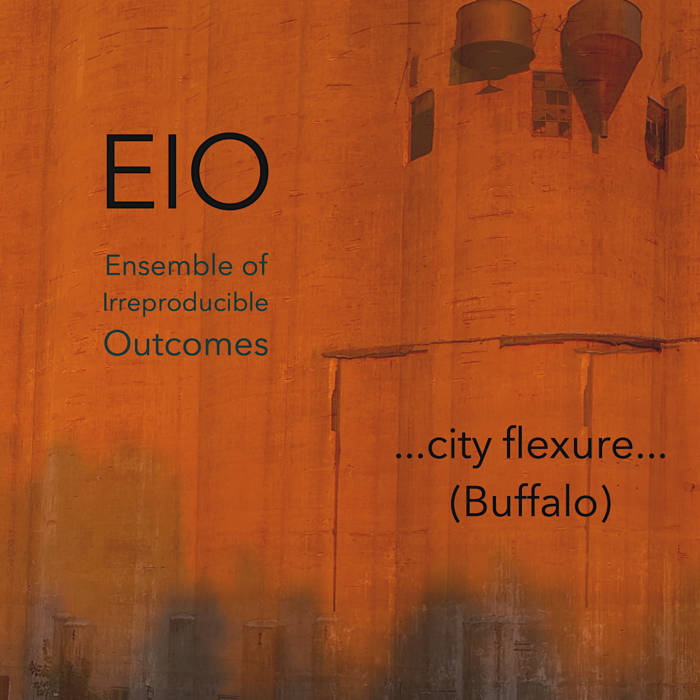 '...city flexure...' is a piece initiated by Brian Padavic, with electronics by David D. McIntire. It was begun by Padavic during a 2016 residency with the Charlotte Street Foundation in Kansas City. It was performed twice in "workshop" duo versions prior to this recording (in McIntire-Padavic and McIntire-Oldham configurations), but this was the first time that all three of us had played it together at the same time. In the Silo City performance space, there is the large "main" silo, where most musicians record and perform, but adjoining that room are smaller spaces, which open onto the central silo and are still richly reverberant. Padavic was situated in the large space, with Oldham and McIntire occupying the smaller spaces on each side, occasionally venturing into the main silo. Thus, the double bass remains fixed in its location, but the horns roam the space, heard from various distances and perspectives. Most of the time, the horn players could not see one another.

The composition is of a piece with the rest of our repertoire in that it is never played the same way twice, but is consistent in its affect. Also consistent with our process, discussion of "what to play" is negligible. Beyond understanding the basic premise and the span of time against which we must pace ourselves, we simply listen to each other and respond in the moment and in the space. The double bass plays continuously over a shimmering drone on D (concocted from hundreds of sine waves), while the horns push and pull against the prevailing tonality. Over time, a melody emerges, is taken up by all three musicians and then slowly dissipates.

This recording was captured at a run-through of the piece at Silo City in Buffalo NY, a sort of dress-rehearsal in preparation for our New York City performance, with no audience apart from occasional folks exploring the silo ruins who happened to wander past. By this point in the week, we had recorded and performed in the silo space for three days and we were thoroughly integrated with the space. It was a chilly morning, probably only reaching about 50 degrees inside the silo. I placed my horns in a patch of sunlight, to help them stay warm. We set up our recording gear, warmed up and played through once, with no stops or re-starts. This document is a live performance, entirely free of edits.

The following day we drove to NYC and performed it on Concert Nine of the Soft Series, curated by Melissa Grey and David Morneau.

NB: Recording in the silo is fraught with many factors beyond any producer's control. The wind flows through constantly, boats churn past on the Buffalo River just outside. Walking tours of sightseers materialize regularly, bemused and baffled by the musical activity within. Remaining silent on the gritty concrete floor is nearly impossible; the structure itself produces sounds apropos of nothing. The chilly fall air makes horn intonation a special challenge. Despite these factors, we feel a connection to this space that transcends these concerns . This is the basilica we were searching for.