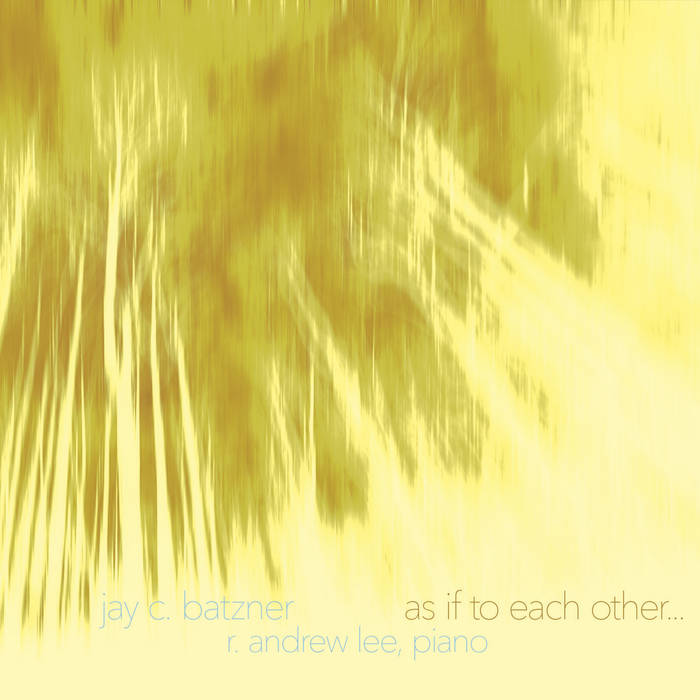 Jay C. Batzner: as if to each other...
piano and fixed media
R. Andrew Lee, piano

A bright arpeggio ripples upwards. Gleaming, sharp-edged sounds suggest a frozen landscape at midday—an obdurate, white brilliance. The sounds are static, immobile. Somehow reminiscent of the harmonies of late Scriabin (the chord is built largely from projected fourths), we hear a complex sonority that seeks no resolution; it seems immune to the notion. The arpeggiated chord recurs unchanged a number of times. It is measured out, but evokes no sense of forward motion. How long we will dwell with this object is impossible to foretell.

Slowly, as if contemplating a glacier, we begin to perceive movement where we once assumed stasis. The final pitch of the rising figure soon changes. After a time, new contours emerge on the horizon and a new sense of depth takes shape. Our grasp of distance and perspective shifts and evolves. Jay C. Batzner’s 'as if to each other...' unfolds over the next 24 minutes with languid, yet inexorable force.

Batzner composed 'as if to each other...' without a specific performer in mind, indeed, “I composed the piece for no practical reason. I figured it would never be publicly performed…” Its existence is owed the RPM Challenge, which takes place each year during the month of February. Participants are to compose an album’s worth (“10 tracks or 35 minutes”) of material in just twenty-eight days. 'as if to each other...' was composed in the space of the shortest month of 2011.

This is not the first time Batzner has put his muse on a rigorous schedule. Seeking greater productivity, a few years ago he created the Unsafe Bull Podcast, wherein he composed a new electronic work every single week. Over the course of the podcast, he created dozens of works. For Batzner, it is in the continuous making that a composer finds new techniques and hones his or her craft.

'as if to each other...' takes its title from a poem by Kathleen Peirce (“Person, Place, Gesture, Thing”), from her collection 'The Oval Hour.' “I've always admired the simple imagery of the poem,” he writes, “and how my attention on the person, place, gesture, or thing present in each line refocuses based on the order of the individual lines.”
Batzner finds much inspiration in poetry, and many of his works have a poetic connection. (Indeed, his early electroacoustic work Near Burning also took its inspiration from another poem by Peirce.) In addition to numerous song settings, he often finds poetry and literature to be a springboard towards new musical ideas, even with non-text pieces. These connections are not always obvious and direct: “I didn’t consciously pattern my piece after Peirce’s poem.”

Characterizing the “sound” of Batzner’s music is difficult. Surveying his catalog, one discovers a dizzying array of influences and techniques. Future musicologists will be challenged to reconcile his passion for the music of Elliott Carter and Pierre Boulez with an equal (and balancing) enthusiasm for the oeuvre of “Weird Al” Yankovic. One unifying principle may be this: to deliver the musical argument with utmost clarity, on multiple levels, simultaneously. Over time, his music has taken on a greater and greater spaciousness, with an abiding concern for transparent textures and inner detail.

The present work is an exceptional illustration of this newfound spaciousness. While the whole is formally balanced, it unfolds with an intuitive ease that is utterly natural. The technique never draws attention to itself: “…I sat down at the piano, struck the first arpeggio and went from there.”

Finally: the electronics. We live in an era where digital manipulation offers “nearly infinite plasticity,” yet Batzner chooses a limited array of colors, all derived from the sounds of the piano itself. The unity of the work is reinforced by this choice; the piano’s timbre with its electroacoustic companion material merge organically. When the electronics enter after about six minutes, the effect is an enlargement of the musical world, an expanded space.

While this is one of Batzner’s most substantial works, it does not begin to convey the breadth of his musical universe. Influences from 1980s pop, deep draughts of science fiction, comics, and a razor wit all exert themselves in his music. He studies Zen, plays the banjo, and sews. He can tie a bow tie without consulting a guide. He remains extraordinarily curious, in an age when we seem to have heard it all before, and this healthy attitude suffuses his composing. With each new work he seeks out new terms and a new musical destination. For the listener, his music offers this same sense of wonder and discovery.

from as if to each other​.​.​., released July 21, 2015
Recorded July 2012 on the Richard Cass Memorial Steinway, White Hall, University of Missouri-Kansas City.